This article featured in the Sunday Times Magazine.

We were big TV watchers in our family. I remember me, Rupa and our older sister, Nutun, would often have our bath on a Friday night and then, as a treat, we could come downstairs. We’d be in our dressing gowns and our pyjamas, which had been warmed up on the radiator. I remember watching Family Fortunes and 3-2-1, but there were loads of TV shows that we loved, like Fawlty Towers and one called Mind Your Language, which in hindsight was really racist.

My parents were pretty liberal considering they were from a Muslim-Bangladeshi background. We grew up in Ealing, west London, and my dad was always really into education and wanted us girls to do well at school. He came over with the Prudential insurance firm in the Sixties on their graduate training course to become an actuary. Then he sort of got wooed into buying a restaurant in Soho, which he named after my mum. Fortunately, us kids never had to work there, other than tasting dishes to see if they were nice, but I’ve always been a city girl because of this.

I’m three years younger than Rupa, so we were always pretty close. Our oldest sister is nine years older, so she went off to uni when I was still at primary school. Being the youngest, I could get away with murder. And growing up I was definitely more outgoing than Rupa. 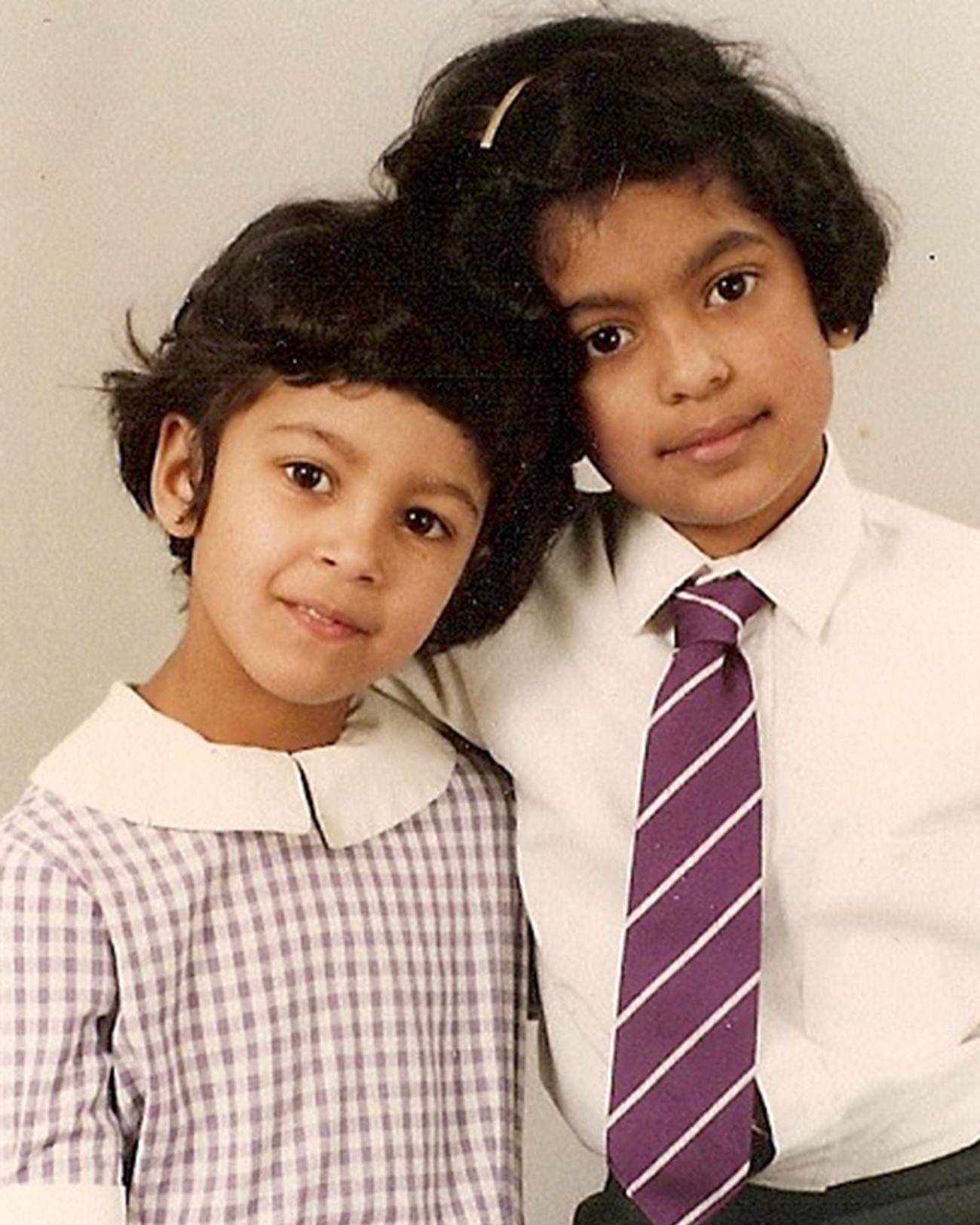 The sisters aged six and nine at primary school in Ealing

I’d always been into popular culture and was in the National Youth Music Theatre. I was 16 when I got my first presenting job on a show called TVFM. Never did I think I’d get the job; there were 600 people at these open auditions. I lied about my age. I said I’d left school when I was actually in my first year of A-levels.

I went to Cambridge University and studied economics. I’d ticked all their boxes, so my parents didn’t mind me doing drama and stuff like that. Also, Blue Peter [which she joined in 1997, aged 22] is a pretty good job for parents to be proud of their kids. Blue Peter was woke before woke. We did appeals before Comic Relief was even a thing and there were ethnic minority people in the production team.

Rupa’s always been into politics. She did it at school and she’s been very politically inclined from the get-go, really. I remember her staying up all night watching the results of the 1992 general election.

We went to a school where the colours were very patriotic: red, white and navy blue. Everyone would wear navy blue socks but she always wore red socks. We used to call her “Radical Rup” in her red socks.

My family [she has two sons with her screenwriter husband, Charlie Brooker] moved to Ealing before Rupa was my MP [she was elected the MP for Ealing Central and Acton in 2015]. It was funny at first when she was running because my kids were, like, “Auntie’s face has come through the letterbox again”. But I think I’ve got used to it now. I always campaign with her; I go door-knocking for her.

The first time she got elected, it was really close. I think her majority was 274 but now she’s increased it to 13,000 or something. She is a really good MP. I have people come up to me in the street and they don’t care about me. They’re, like, “Oh my God, your sister did this or your sister has really helped me with that.”

Now I write a series of kids’ books about a character called Cookie, who is the youngest of three sisters and her middle sister’s really into politics. She’s an exaggerated version of us all. Rupa is really funny and we both see the absurd in everyday life, but it would be a really boring book for kids if it was exactly true to life. 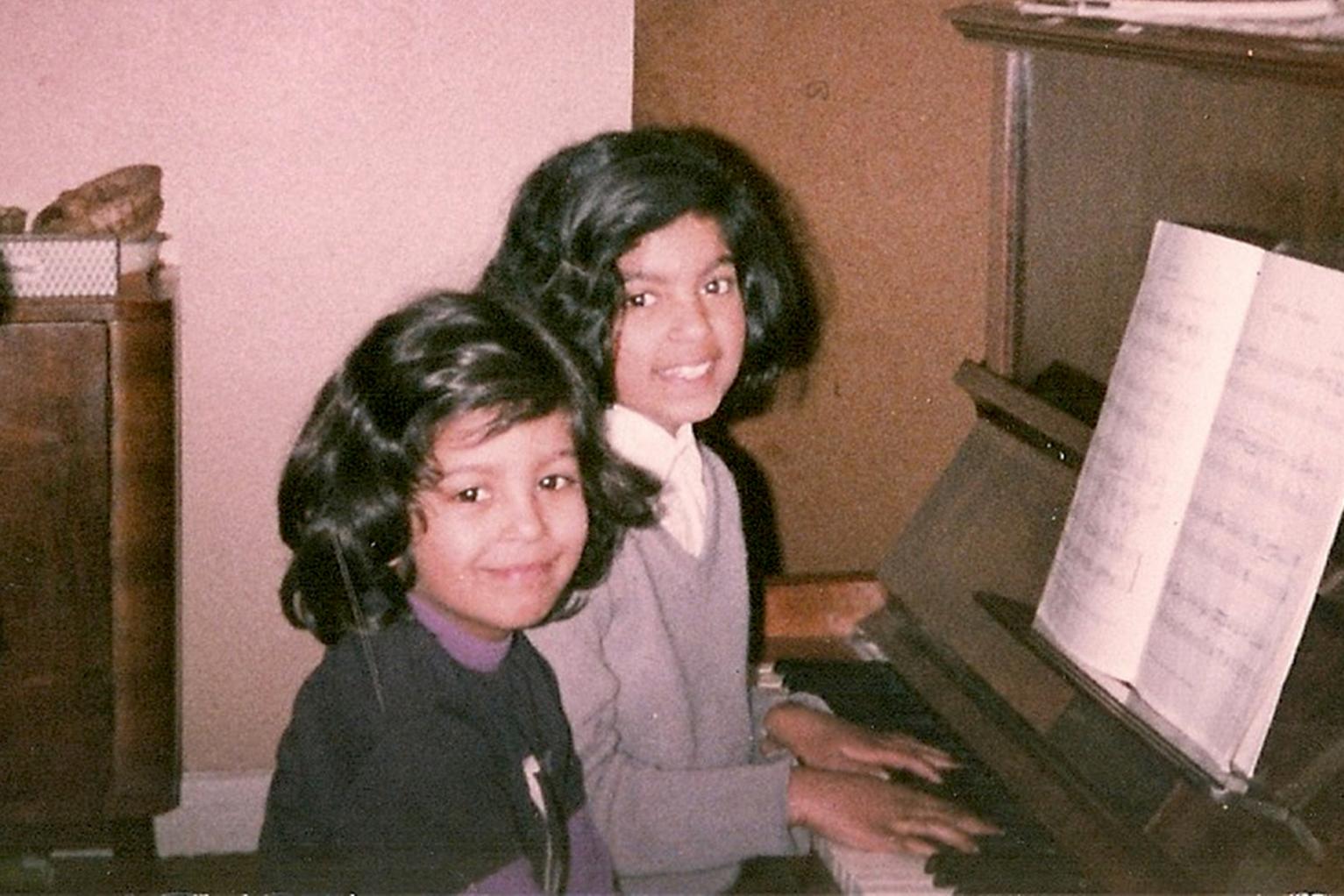 It’s strange being an MP. I should have got over this now because I’ve had three elections. But I think there is something about not taking the lifestyle for granted. Because if you start normalising it, then you’re part of the problem, aren’t you?

It was a marginal seat in 2015; it was a bit of a long shot. I think Konnie and I sent a mass email. Konnie wrote: “My sister, she’s not a political animal, she really cares about Ealing.” People really liked the email and we were getting replies back. It’s maybe that that swung it because it was only by a handful of votes.

It’s sad my parents never really lived to see this. My mum was alive when I was first elected but she had dementia. My dad went in 2014. I do regret that they never saw this because they would have loved coming to the House of Commons terrace for a cup of tea.

My parents had two restaurants at one stage. I remember being upstairs quite often, nose pressed to the window, looking out. It was in Soho, Brewer Street. Not quite where all the sex shops were, but you didn’t have to walk very far. My mum would be, like, “No looking, come on” as she was going to get some veg or whatever was on the menu.

Mum was always quite a strong character. When Konnie brought Charlie to a family dinner early in their relationship, I remember him not saying a lot. It was quite overwhelming for him.

Konnie has always been much more fashionable than me. I was a bit square and introverted. So, for example, in about 1987 both my sisters went to see Madonna at Wembley and I was on strike, saying “I’m not going to that capitalist rubbish” or whatever.

We never went on holiday as kids, particularly. We didn’t have loads of money. So if we went anywhere, it was actually Exmoor. And my mother learnt to drive before my dad, so she would be a lady in a sari driving us; my dad reading the map, us getting completely lost.

My father was maybe the prototypical feminist because he didn’t mind three girls, while my mum really did. In those days men weren’t present at the birth, so she would phone from the hospital and say: “It’s another girl.” And my dad would be, like, “That’s great.” He did nappies and everything.

Blue Peter really was a dream job for Konnie and she was great at it. It was quite surreal for us. People stopped us in the street to say things like: “My nephew is making a doll’s house that Konnie made this week.”

Actually, the last time I ever saw my maternal grandmother was on Blue Peter because Konnie went back to visit our ancestral village in Bangladesh. She’s talking English and then my grandmother comes into shot and says: “Konnie, what are you doing here?” And Konnie says in Bengali: “Hello Gran, nice to see you.” That VHS wore out because every time someone came to our house, they’d be made to see it. It’s making my eyes go a bit moist just thinking about it.

Rupa on Konnie
When she was younger, she was a big doodler. You could tell if she’d been near something as the lettering on it had turned 3D and pictures appeared in the margins

Cookie and the Most Mysterious Mystery in the World by Konnie Huq is published by Piccadilly Press at £10.99